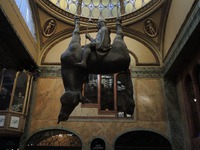 A tour  about communist regime and its fall led by somebody who has really experienced it.

I will take you back in time. You will learn about the history of Czechoslovakia after the end of WW II. and about the ordinary life of local people in those times.

I will share with you my personal experience. I was born in 1965 and so I have spent all my childhood and youth under communist regime. Some members of my family became victims of communist repressive policy.

I finished my studies in 1988. In November 1989 I was one of the participants of so called Velvet Revolution. There were 100 000 people demonstrating daily at the Wenceslas Square in Prague, listening to the speeches of Czech dissidents and hoping for better future. Just a few months later I started to work at the presidential office of Mr. Vaclav Havel.

As you see I have so many memories to talk about.

During our tour we will visit some of the places connected to those historical events - National avenue, theatre where Vaclav Havel was working, headquarters of state secret police and Wenceslas square.

A tour for those interested in the history of WW II. You will learn about the most important act of resistance in occupied Europe - assasination of Reinhard Heydrich and visit two places in Prague which are connected to that event : Cyril and Methodius Church and the crossroad where Heydrich was killed. Then we drive outside of Prague and visit Lidice - a small village which was burnt down by Nazi as a revenge for Heydrich´s assasination.

Heydrich was one of the most powerful Nazis, a man who was in charge of the Final Solution - programme of extermination of Jews.In autumn 1941 he was appointed by Adolf Hitler as so called Reichsprotector of the Protectorate Bohemia and Moravia which was the official name of our at the time occupied country. With his arrival to Prague started a brutal terror. Czechoslovak exile government therefore undertook the military operation known under the code name "Operation Anthropoid" whose aim was to assasinate him. This mission was succesful - Heydrich was assasinated in May 1942 by two Czechoslovak paratroopers sent here from Great Britain. As a revenge for Heydrich´s death Nazis burnt down the little village of Lidice, which is just few kilometres away from Prague. All male inhabitants of the village were shot, women were deported to the concentration camp and Lidice children were killed in gas trucks.

Our tour take you first to the place of the assasination which is in Prague subursbs. Then we visit the hiding place of paratroopers after the assasination - St.Cyril and Methodius church. The crypt has remained untouched and you can still see the traces of the heroic fight of the paratroopers there. It is, without no doubt one of the most authentic and moving memorials linked with the World War II in Europe.

Then we will drive to the village Lidice (about 30 minutes drive from Prague) and pay a visit to the local museum in which you will learn more about this moving story.

This tour is not available on Mondays.

A very pleasant way to learn more about Czech mentality and lifestyle.

We will visit a few restaurants and cafes and taste various local dishes and drinks. We will be talking not only about our cuisine but also about our traditions and cultural background. I will take you away from the busy and touristy City centre to popular residential area Vinohrady. We will stop at one of the farmer markets and buy some goodies (as freshly baked fruit tarts) there. You will see how Prague people live and where do they go for shopping. In one word you will feel not as a tourist but as a local.

Price includes: guide, tickets for public transport (we will not be only in a City centre) + several food and drink tastings

Please note that this tour is not suitable for vegetarians or vegans. We, Czechs are serious meat eaters.